The state of the UAE construction market in 2022

State of the UAE’s Economy

The UAE is making good progress in sustaining its economic growth. According to Abdulla Bin Touq Al Marri, the UAE is hoping the economy will grow by 5% to 6% in 2022 as it recovers from the pandemic and by the same pace over the next few years to help double the economy by 2031. The UAE's non-oil economy has benefited from public spending, credit growth and improving business sentiment, and its hosting of the Dubai Expo has boosted tourism. The International Monetary Fund (IMF) has predicted that the UAE’s economic growth will accelerate to 4.2% in 2022.

The UAE’s Federal Supreme Council elected Sheikh Mohammed bin Zayed al-Nahyan as the new President in May 2022, solidifying his rule over the emirate and key regional player. The Council, which groups the rulers of the seven emirates of the UAE federation, elected Sheikh Mohammed,  after the death of President Sheikh Khalifa bin Zayed al-Nahyan. The ascension of Sheikh Mohamed as the third President of the UAE marks yet another defining moment for the nation that has just completed 50 years of breathtaking growth. The UAE has drawn the blueprint to realise its dream-goal of becoming the “Best Nation in the World” by 2071 when it will complete 100 years of nationhood.

There is no doubt the Expo 2020 has raised the profile of Dubai and the UAE as billions of dollars have been spent on it by the government and private sector. Economists forecast that the domino effect of the recently-concluded highly successful Expo 2020 Dubai will be felt in 2022 and 2023 in the form of strong foreign direct investment (FDI) in strategic sectors such as real estate, retail, tourism and hospitality. Diversifying and strengthening the business environment will be prioritised, but hydrocarbons will remain central to the economy.

The UAE approved a federal budget of US$ 16.04 billion for 2022, according to the Ministry of Finance. The budget allocates US$ 6.59 billion for social development and benefits, US$ 5.85 billion for general government affairs and US$ 267 million for federal projects. The federal budget accounts for only a fraction of consolidated state spending in the UAE as individual emirates such as Abu Dhabi and Dubai also have their own budgets. It is, however, an indication of official plans for the economy. The ministry said US$ 0.63 billion were allocated for infrastructure, and US$ 0.65 billion for financial investments.

The UAE Cabinet approved the country's federal budget for five years from 2022- 2026, with total expenditures of US$ 79 billion during a Cabinet meeting at UAE pavilion at Expo. Most of the spending is going to development and social benefits. The largest share of the 2022 budget was allocated to the development and social benefits sector at 41.2%, from which 16.3% is for education, 6% for social development, 8.4% for health, 8.2% for pensions and 2.6% for other services. Some 3.8% of the budget was allocated to the infrastructure and financial resources sector.

With the small decline in spending in 2022, the budget suggests a modest pulling back of fiscal support at the federal level as the economy recovers from the Covid-19 crisis and a similar level of spending seems likely for the next five years,” according to Scott Livermore, ICAEW Economic Advisor and Chief Economist at Oxford Economics. Also established at the meeting was the Emirates Infrastructure and Housing Council, led by Suhail Al Mazrouei, Minister of Energy and Infrastructure, which aimed to unify federal and local housing efforts, co-ordinate on road and infrastructure projects, and build an urban and housing road map for the UAE.

Dubai ruler Sheikh Mohammed bin Rashid Al Maktoum approved Dubai’s budget for the fiscal years 2022-2024, with a total expenditure of US$ 49 billion. Dubai plans to spend 9% of total expenditure in 2022 on infrastructure projects while 2% will be kept as special reserves. In terms of sector allocations, 42% of expenditure will be directed to the economic, infrastructure and transport sectors while 30% will go to the social sector. The new budget supports the emirate's efforts to stimulate its macro economy and goals of Dubai Strategic Plan 2030.

The construction sector plays an important role in the economy. According to ResearchAndMarkets, the construction industry is then expected to expand at an annual average of 3.8% between 2022 and 2025.

Figure 1 represents UAE construction contractor awards from 2021 to 2022 in US$ Mn. 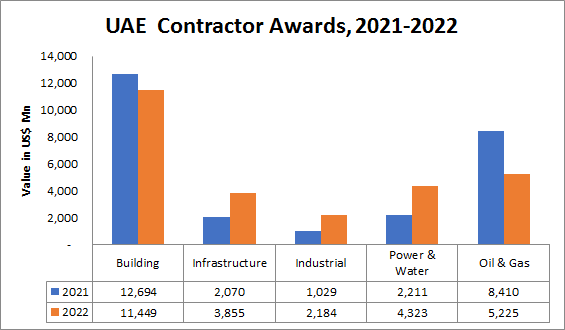 The UAE’s construction market is highly competitive, with the presence of major international players. The market presents a plethora of growth opportunities, which is expected to further drive the market competition. The list below represents the major contractors in the UAE’s construction market in 2022 based on value of contracts won in 2022 till date (1st Jan to 25 May 2022), including but not limited to

Major UAE Contractor to look out for this 2022

Oil Company (ADNOC) recently announced three oil discoveries including one at Bu Hasa, Abu Dhabi’s biggest onshore field, with a crude oil production capacity of 650,000 barrels per day (bpd). The discovery in Bu Hasa includes 500 million barrels of oil from an exploration well in the field, the company said in a statement, adding that the discovery offers "substantial additional premium-grade Murban oil resources". ADNOC said the second oil find was in Abu Dhabi’s Onshore Block 3, operated by Occidental, and around 100 million barrels of oil in place were discovered. In the third discovery, around 50 million barrels of light and sweet Murban-quality crude were found in the Al Dhafra Petroleum Concession, ADNOC added.

ADNOC also plans to significantly increase its investment in hydrocarbons and will raise its output capacity to 5 million bpd by 2030. It has awarded a number of contracts to different companies to increase its production.

Major UAE construction projects expected to be awarded in 2022

If you want to find out more on top upcoming UAE constructions projects, get in touch with us today.